When traveling, food culture is one of the quickest ways to earn the trust of locals and learn about their culture. Go for the sure thing—visit the best organic restaurants around the world.

Alice Waters is pretty much the godmother of farm-to-table cuisine in the United States. Since the 1970s, Waters’ has centered her vision for her restaurant, Chez Panisse, around unprocessed, local cuisine. The people of Berkeley, California, support her pure, wholesome food and nurture her continued growth as a restauranteur by continuously filling the seats at her trendy diner.

Amsterdam’s De Kas restaurant specializes in locally grown produce, which is not only the focus of their menu but their restaurant’s location and layout as well. De Kas collects its own produce from the year-round garden that the restaurant property rests on. They cultivate all their produce on-site, and their meats and fish are locally-sourced. The yields from the harvest dictate their fare, so prepare yourself for rapidly changing menus.

For Amass’ Head Chef, Matthew Orlando, the goal is not only to fill the bellies of Copenhagen’s residents with ingenious food but to eliminate food waste as much as possible. The efficiency of his operation would please any environmentalist—he coaches his staff to make do with minimal refrigerator space and transforms food ‘scraps’ into herbs, seasonings, or crisps. Ancient Danish fermenting and drying techniques are instrumental in creating a truly no-waste food kitchen.

This South African winery and restaurant embrace the African, European, and Asian cultures that have seeped into South African tradition. The restaurant nurtures its own Dik Delta Culinary Garden, which contains the rarest and most endangered species of edible plants; for generations, this has been a part of indigenous South African tribal tradition. They’re keeping the spirits of their ancestors alive in their organic cuisine and the wine produced in their very own vineyards.

It’s hard to imagine creating an intimate dining experience in Singapore, but the metropolis’ best-kept secret is the urban garden at the Open Farm Community restaurant. Bringing farm-fresh food to their patrons is as easy as stepping outside and harvesting their fresh, nourishing produce. In a city as vast as Singapore, they realize the ever-growing importance of connecting urbanites to their food and filling unsuspecting city landscapes, such as rooftops and sidewalks, with nutritious food.

Pha Tad Ke Botanical Garden protects Laos’ biodiversity and preserves native flora—and would not exist if founder Rik Gadella hadn’t had a midlife crisis and spent 6 months traveling throughout Asia. He bought 40 hectares of thick jungle and transformed the landscape into a unique garden paradise. There are 10 different gardens, orchid nurseries, ethnobotanical plots, and an enormous arboretum and features its own café which utilizes its home-grown, jungle plant life to feed keen travelers.

Located in Bacolod City, Philippines, May’s Garden is a hothouse of activity—not the least of which is its 100% organic garden and native pigs bred right in their backyard. The fun doesn’t end there as they (amazingly) also have a swimming pool and offer horseback riding. It’s the perfect place to unwind after a day in the heart of one of the busiest cities in the Philippines. 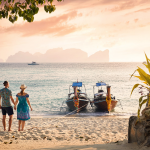 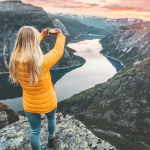