Driving on familiar roads can seem like a piece of cake. However, the minute you get used to everything and spend less time focusing on driving and more time doing anything else, problems occur. You end up becoming overconfident. This attitude can be bad on roads that you know. However, it’s even more problematic when you take this attitude on unfamiliar roads while traveling. Here are the best ways to be safe when driving in an unfamiliar area and avoid being overconfident with your skills.

Google Maps and Apple Maps are wonders in today’s world, as they usually know precisely how to get you where you want to go. This is generally the case, but they aren’t always up to date when it comes to new roads and construction. It’s not safe to constantly look down at your screen, especially in new areas where you need to be looking at roads and signs. You can still use GPS, but try to understand where you’re going beforehand so that you can ignore those directions when they give you incorrect information.

One of the best skills you can learn to help you whenever an unfamiliar driving situation confronts while traveling you is defensive driving. Defensive driving prioritizes safety and caution above all else. You remain vigilant, looking at everything happening on the road, such as irresponsible drivers, hazards, and bad weather. When driving defensively, you assume that other drivers will make mistakes. This way, even if it’s your turn at a stop sign or traffic light, you can see if they’re not paying attention and get out of harm’s way.

Every driver is familiar with running into an uncomfortable situation and spoiling the rest of their driving experience. Getting cut off on the highway doesn’t mean you should spiral down this hole of frustration. Instead, shake it off, and get back to being focused. Even if you miss your turn, it’s okay. The second you become distracted, you’re more likely to end up somewhere worse or even get into an accident.

These were only some of the best ways to be safe when driving in an unfamiliar area, but they all share similarities. You want to be a calm and by-the-book driver, and you want to turn these unfamiliar destinations into ones that you know like the back of your hand. Of course, this is easier said than done, but it will help you be safe and keep everyone else around you safe as well. 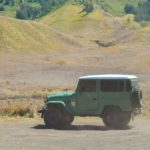