Many movies are filmed in studio lots, but many others use real, stunning locations for their sets. In fact, a number of these locations are available for the public to visit. If you’re a movie buff, you’ve got to check out some of the famous movie locations you can visit.

Navigate the article show
1. The house from A Christmas Story
2. The hotel from The Shining
3. Hogwarts from the Harry Potter film series
4. The island from The Man with the Golden Gun
5. Mirabell Gardens from The Sound of Music

1. The house from A Christmas Story

When Christmas is on the horizon, you can always bet on plenty of A Christmas Story marathons. If watching Ralphie’s tale of Christmas misfortunes is your favorite Yuletide tradition, it’s time to make a stop at the actual house from A Christmas Story. Located in Cleveland, Ohio, this movie location features a host of original props, costumes, and behind-the-scenes photos. For the true Ralphie experience, you can even plan an overnight stay.

2. The hotel from The Shining

This famous movie location you can visit certainly isn’t for the faint of heart. Horror buffs will have a field day at the real-life hotel made famous by Stanley Kubrick’s The Shining. If you’ve ever gaped at the film’s stunning exterior shots of the Overlook Hotel, you were actually admiring the Timberline Lodge near Mount Hood, Oregon. The hotel even owns the axe from Jack Nicholson’s iconic scene, making this a must for any Stephen King fans. The views are stunning, but the creepy events of the film may leave you with a chill—you just might have a paranormal experience yourself.

No film or book series is quite as iconic as Harry Potter. The movie series transported millions of fans into the wizarding world, and with a bit of travel, you can visit several of the famous filming locations. Take a trip to Alnwick Castle in Northumberland, England, to see the stunning façade of Hogwarts. Its grounds will make you feel like you’re in the middle of Quidditch practice. For a trip inside the school, make your way to Christ Church in Oxford. Its Hall was the inspiration and filming location for Hogwarts’ Great Hall. A few other memorable sites speckle the grounds, so take a tour to walk the same paths as Harry, Hermione, and Ron.

4. The island from The Man with the Golden Gun

Treat yourself to a day in the life of 007 by taking a trip to the island featured in the ninth James Bond film. Located in Phang Nga Bay in Thailand, Khao Phing Kan—popularly known as James Bond Island—was a central location in The Man with the Golden Gun. Tourists have been barred from the island since 1998, but you can see the stunning island from the mainland shore. The jutting mountains and dramatic scenery will make you feel like you’re in the film.

5. Mirabell Gardens from The Sound of Music

Few musicals are as charming as The Sound of Music. With its lovely songs, stunning scenery, and memorable story, this film was a huge part of many people’s childhoods. Take a trip back in time to the Von Trapp household at Mirabell Gardens in Salzburg, Austria. Featuring the same gnome garden, Pegasus fountain, and statues you’ll recognize from the film, much of it looks the same. It’s the site where Julie Andrews sang the timeless song “Do, Re, Mi,” and walking through these gardens will make you want to sing along. 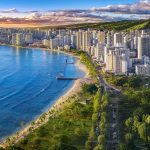 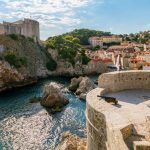